Something is rotten in the state of Explainer Videos

I apologize in advance for today’s little rant but what I’m seeing is pretty painful, making me feel a bit like a character in a Shakespearian tragedy 🙂 OK, maybe that’s exaggerating but the current state of affairs is certainly cause for concern.

As one of the early players in the explainer video space, I feel proud to have been somewhat of a pioneer, contributing in my small but important way to the popularization of animated explanatory videos.

In the past, I was flattered when I saw people trying to copy our work. Admittedly, not happy,  but at least flattered in a twisted “imitation is the sincerest form of flattery” kind of way.  There were a couple of occasions when two separate companies literally copied content word-for-word from the Gisteo website and even mimicked the layout and colors of the site. There were several times when I actually found Gisteo work in the PORTFOLIOS of competitor websites.  It takes some real cojones to do that and it’s wrong on so many levels!

What I’ve seen over the past year or so, however, is much, much worse and more damaging to the overall industry. I’ve seen a growing commoditization of this wonderful form of communication.  I’ve seen vacuous, yet enticingly cheap, competitors pop up like dandelions on a summer field- all offering their uniquely trite interpretations of “explainer videos.”  I’ve seen formulaic, cookie cutter productions saturate the market like those cause-related wrist bracelets flooded the world during the middle of the last decade. I’ve seen companies in faraway lands promise to do “amazing” work for $500 and I’ve even seen bottom-feeding freelancers offering their services for peanuts on sites like Fiverr.

And, as if to rub salt in the proverbial wound, I get emails like the one greeting me in my inbox this morning. Granted, I’ve gotten a few of these before in the past but mindless spam like this serves to underscore the rotten state of affairs.  Go ahead and read it real quickly. 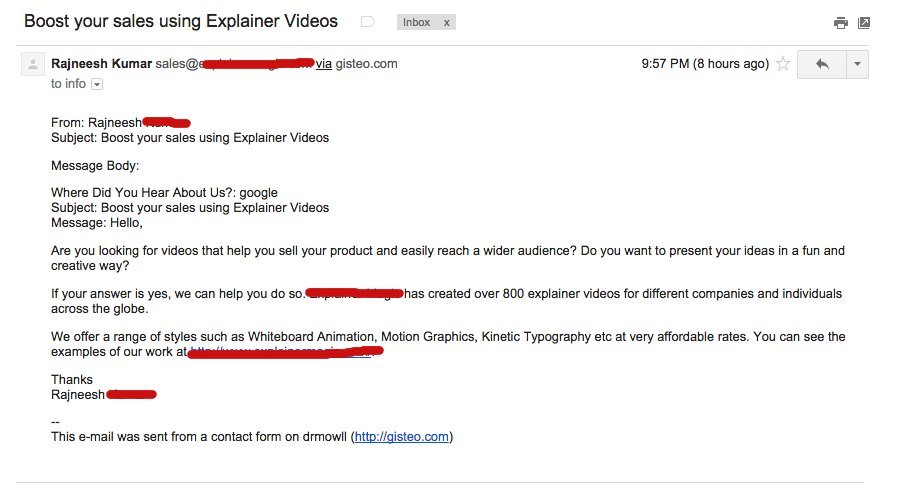 OK, great. So let’s analyze the messaging here a bit. To protect the identity of this lazy, shameless excuse for a “marketer,” I’ve crossed out their last name, company name and contact information. No need to single anyone out here, plus this fellow is far from the only culprit trolling the Internet waters.

First off, I’m not even criticizing a firm that’s located overseas (this guy is in New Delhi)  wanting to grow their business. I recognize that email marketing is a viable form to do this but wouldn’t you apply a modicum of judgement and strategy preparing your content and organizing your contact list?  Go ahead and craft a group on MailChimp and send emails addressed to US-based explainer video production companies, offering your outsourcing services for example. Talk to me about how you may be able to assist with cheaper labor, longer hours etc. Show me that you’ve actually visited Gisteo and read about my company to connect with me a smidgen. It would still likely go straight into the “trash” folder but at the very least it would be a coherent email with some inherent value, if not to Gisteo, maybe to some other company. But…alas….his lead copy is “Are you looking for videos that help you sell your product and easily reach a wider audience? Do you want to present your ideas in a fun and creative way?”

I mean, come on.  As they say….”really?”  Do Samsung marketers write Apple execs trying to sell them the latest Galaxy?  Does Hightail call Dropbox asking them if they’re looking for a better way to store and share large files?   Does Vimeo knock on Youtube’s door promoting their video hosting services?  Did fly-by-night advertising companies write David Ogilvy (no, I’m not comparing myself with the venerable David Ogilvy- it’s just an example!) touting the benefits of advertising to him and his firm?  Did….alright that’s enough. You get the picture. It’s just mind-numbingly stupid and I’m probably giving them too much credit as a true competitor in these aforementioned analogies.

Secondly, I don’t believe the “800 explainer videos” number for a second. I know the blood, sweat and caffeine that has gone into making 500+ of these and find that number outlandish. I visited their website and the portfolio section is pretty barren, plus their own explainer video promoting their very own service is actually branded with a different company’s name.  I shite you not.  The url and name of the company on the header is different than the name of brand in their intro video. Wtf?  It’s just sloppy and irresponsible.

So, there you have it.  That’s my rant for today and I’m sticking to it.  Do I truly feel threatened by companies like this?  The answer is “yes” and “no.” “Yes” because hundreds of murky entities like this one have flooded the marketplace and muddied the industry’s waters.  It has become increasingly harder and more time-consuming for clients to sift through the vast offerings out there while searching for the right partner. “No” because their work is pretty awful and discerning clients who do their homework will be able to separate the “wheat from the chaff” when shopping for the right explainer video production companies.

Ultimately, the onus is on Gisteo and other quality explainer video production companies to continue to do great work with outstanding writing, superior animation and hand’s on service.  That’s the best defense to the current onslaught of mediocrity.  The writing is on the wall and it’s time for all of us to raise our respective games in 2015 and beyond!  I’m ready for the fight, are you?