Cartoon Video Makers: The Good, The Bad and The Ugly 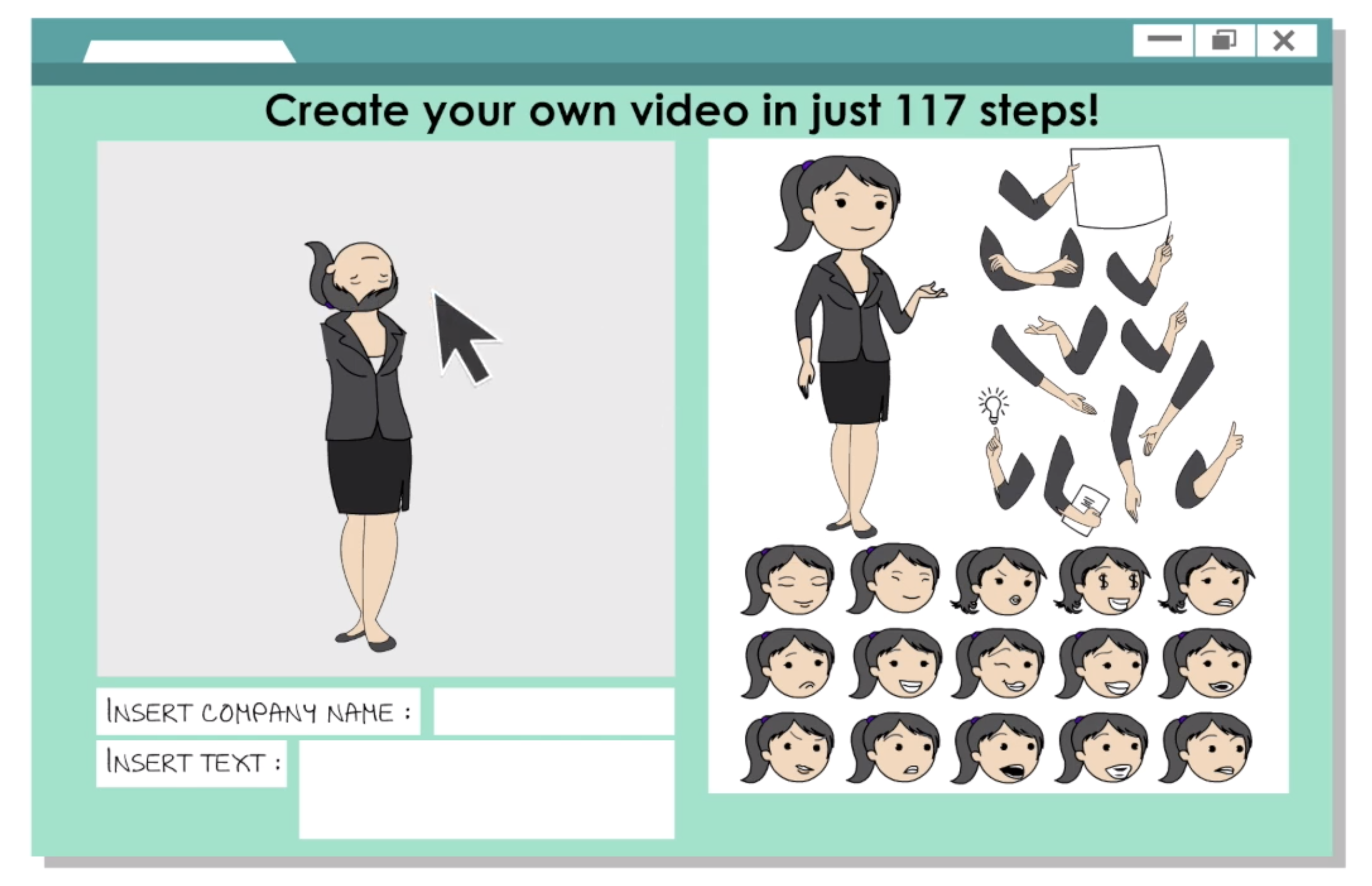 Cartoon video makers are do-it-yourself software platforms that enable you to create your own video, including an animated explainer video, for your product, service or company.

If you’re thinking about getting an explainer video to pitch your offering and you’re on a tight budget, chances are you’ve started to research cartoon video makers as an option.

So let’s take a closer look at the good, bad and ugly of cartoon video makers.

The good of cartoon video makers

Let’s be honest.  Good animated explainer video productions aren’t cheap.  Of course, it’s all relative. Our prices at Gisteo are certainly towards the affordable side of the spectrum as there are animated explainer video companies that charge $20K+ for these, but still, it will cost you a few thousand dollars. Sure, there’s a good reason for this…namely the many hours of blood, sweat and coffee that go into scripting, conceptualizing, illustrating and putting everything together to make a quality explainer video .

It can be a big investment- especially for companies who are boot-strapping it…so, naturally, if someone comes along with a free or low-cost alternative to enable you to do-it-yourself, it can be an enticing proposition.

That’s where these cartoon video makers come in. There are a growing number of online platforms that provide you with a free or cheap way to make your very own explainer video.

Companies like Powtoon, Animaker, GoAnimate (now Vyond), Animiz, Biteable, VideoScribe, Moovly and many others are solid do-it-yourself alternatives to custom-made animated explainer videos like those we create here at Gisteo.

Powtooon , for example, is a fun, self-service animation platform that has been around for almost a decade and how grown in popularity over the years. They have a free package that comes with a range of graphics including 17 free characters.  To access more robust options and features, however, you need to upgrade. Powtoon has a variety of templates that can use to suit your needs or you can even create a video starting with a blank slate if you’ve got the guts to give it a go.  As they rightly recommend, you’ll want to start with developing your script and then take it from there as you navigate through the different options and templates.  Oh, and you’ll need to upload your own voice over file that you’ve either recorded yourself or have gotten from a voice over talent who you hired separately.

Animaker is very similar to Powtoon in that it offers free options as well as upgrade packages.  As with Powtoon, you’ll need to upload your own voice over file or images that you want to use or choose from their packs of images and templates. Their free version comes with up to 6 characters, which if far fewer than Powtoon’s 17 characters and a real limitation in my opinion.

Make no mistake, however, there are definitely some great features on both Powtoons, Animaker and other cartoon video makers and they’ve gotten better over the years. If you’re short on cash and have plenty of time to spend putting together your own explainer video, these cartoon video makers are at least worth checking out and playing around with.

BUT (and there’s always a “but,” right?) it’s not all sunshine and rainbows with these DIY cartoon video makers either… which leads us to the next section.

The bad of cartoon video makers

OK, here’s the deal.  At the end of the day, these platforms are all just tools and the process can be tedious.  If you don’t choose the option to upgrade and pay a fee, you’ll  as you’ll likely be faced with far too many limitations to create something captivating and truly unique.

Ultimately, you get what you pay for with these cartoon video makers. You’re restricted to using their library of stock images unless you have your own library of compelling imagery to upload…and, if you do, you probably had to pay for those images somewhere anyway.

And, while cartoon video makers talk about being quick and easy, it’s really not the case when you actually roll up your sleeves and start creating your video. Just because they come equipped with drag and drop tools to help, it definitely does not mean you won’t be putting in serious hours to make your video.  There’s a significant learning curve, especially if you’re not an overly tech-savvy person with extensive experience in creative endeavors.  Just look at the screenshots from some cartoon video makers below and you can see for yourself that you’ll constantly be fiddling with numerous steps that will likely demand loads of trial and error.

Tools, platforms and templates do not necessary equal “easy.”  iMovie by Apple is a simple video editing tool, for instance, but that doesn’t mean you can just jump in and produce an amazing video with it.  You need to learn the tool and master it…which can take many hours or weeks.  Same goes with Wix or WordPress for websites or even PowerPoint for presentations.

Plus, content has always been, and always will be, king. If you don’t have strong content and an engaging story, the tool won’t magically transform your video into an amazing end product.  If you haven’t ever created an explainer video, don’t underestimate the time needed, starting with writing a compelling script, to put one of these things together. No cartoon video maker is going to help you with what is the single most important aspect of your explainer video- your messaging.

Ultimately, you need to ask yourself how much your time is worth?  Do you really have a solid week or two to devote to learning how to use these platforms and trying to work within their confines to produce something you can live with when promoting your brand?

In addition, perhaps you have a very unique idea that requires a lot of customization to really make it work.  Maybe your story calls for showing a dancing purple bear…just making this up…and there’s no purple bear contained among the characters, not to mention a way to make him dance.  You’ll constantly be looking for workarounds, unable to find graphics that fit every situation and need on these cartoon video makers…far from it.  You’ll be forced to compromise when using their templates and available tools. In my opinion, your brand is far too important to “settle” for something that’s not capable of helping you fully express your vision. That leads us to the next section.

The ugly of cartoon video makers

Isn’t the whole idea of creating an animated explainer video to have something that cuts through the clutter and pitches your wares in a compelling way?  Yes, of course it is and, when using one of these cartoon video makers, that will be a Herculean task.

You see, you aren’t the only ones who have considered going the do-it-yourself route. These platforms are growing in popularity and, due to the free or very cheap price to produce a video with these, your video with look like it was made with, well, a do-it-yourself cartoon video maker.  Look at the samples on Powtoon, Animaker, VideoScribe and others…the samples look very similar. You’ll see a lot of the same characters and visuals appearing over and over again.  There’s a great chance your customers will sniff out that you pieced together something with a template because the end-product has that template je ne sais quoi about it.

They just look generic…cookie-cutter-ish…cheap.  If you’re in a competitive category, you probably want the best for your brand and, in most cases, these cartoon video makers simply aren’t going to achieve that.  Like we’ve talked about before, it’s probably better not to have an explainer video at all if it’s not professional-looking and well-crafted. It’s likely to harm your brand, more than help it in these cases. Case in point below:

As long as you keep the above points in mind, cartoon video makers can be at least worth exploring,.  They DO have some impressive features and respectable technology behind them.  Once you put in a time to learn the in’s and out’s of cartoon video makers, you’ll be able to produce video content relatively quickly.

They could be particularly good options for internal training or presentations or a classroom lecture as well as content created as part of a fun, ongoing social media campaign explaining key topics.  Cartoon video makers may also be good if you have a Youtube channel or blog and like to mix things up every now and then with video content. The low (or free) pricing of these cartoon video makers means that you can produce these things in volume which would be much more expensive obviously with a service like Gisteo.

If you want a video built to impress, however, you’ll want to go with a custom option with professionals who can craft the message you need while bringing it to life with quality imagery, sound, transitions and effects.

As always, if you’d like to discuss your animated explainer video project, just contact us and we’ll be in touch with lightning-fast speed!