By Stephen Conley November 16, 2015 No Comments 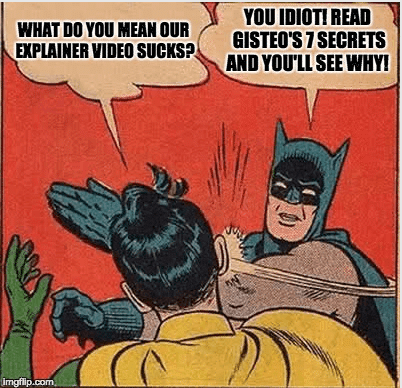 Far too many marketers out there spend far too much time and, in some cases, money creating explainer videos that, quite frankly, suck.

With that in, let’s jump right in and review the 7 Secrets To Creating Explainer Videos That Don’t Suck!

In his book on brand strategy titled Zag, Marty Neumeir states “when everybody zigs, zag.” Don’t be afraid to be original,  stand out and zag when creating your explainer video. You can be unique with your script, visual treatment or, ideally, both. You’re trying to differentiate yourself in what’s likely a crowded marketplace, right ? Then why follow all of your category conventions and soon-to-be clichés?  It’s fine to take inspiration from the winners out there and study what’s working in your industry…but just because your competitor’s live-action video features a whimsical, plaid-wearing lad sporting a hipster beard doesn’t mean you need to do it too!

If you’re doing an animated explainer video production, try to think beyond: “Meet John. John has a problem. XYZ solves the problem and makes John super happy.” That approach has been abused by far too many companies out there. I’m not saying that the problem-solution-benefits framework doesn’t work (it does) but lazily and literally following the “Meet John” recipe is a gateway drug to mediocrity. That’s what we call a “McSplainer.”

You can learn more in our tongue-in-check “guide” here:

Since Gisteo’s launch in 2011, our quirky (and clean-shaven) Gisteo Guy has been the face of the company. Our approach is unlike any other video production company intro that I’ve seen and this particular zag has served us very well.

Wtf? You may think you sound more relevant when using big buzzwords and crafty corporate lingo but your audience will quickly tune out. This isn’t an MBA program thesis or scientific white paper­– write your explainer video script as if you’re talking to a friend or telling a story to someone.

Use plain English and an approach that connects with people. Don’t worry­­­– your audience gets their fix of jargon from infinite touchpoints (see what I mean?) each and every day. Create your explainer video to be a temporary escape from the mind-numbing gobbledygook and they’ll thank you for this much needed…paradigm-shift!

Success Secret #3: Avoid trying to say everything to everyone

This is a really two-part pitfall. Let’s break it down.

First of all, your explainer video should be as concise as possible. What’s the ideal length? Well, that depends on a number of factors that we’ve talked about before but trying to say everything about your product, service, app or business in a single video is a surefire formula for disaster.

You should work to simplify and communicate the “gist” (pun intended I suppose) of your value proposition. Avoid tossing in a “laundry list” of endless features that could dilute your message. Give people a tasty appetizer, entice them… don’t shove a cruise ship-sized buffet dinner down their throats. Remember, explainer videos should be just a part of a larger, integrated marketing strategy- not a substitute for your FAQ’s, About Us, detailed “how it works” instructions, well-written sales sheets etc.

Secondly, if you try to be everything to everyone, you’ll likely end up being nothing to no one. Your goal should be to deliver the right message to the right target audience and it’s highly unlikely your target audience includes “everyone.”

A lot of marketing experts recommend focusing your message on a your ideal prospect or “avatar.” An avatar represents all of the traits that make up your perfect customer, user, visitor etc. When developing your avatar, you combine commonalities in your customers and project their traits into one representative person. When you speak to your avatar, it makes your target feel unique and understood. People crave individual attention and, when they feel that they are getting that in your explainer video, they’ll be infinitely more receptive to your message.

In some instances, companies may indeed have distinct targets with very different challenges, problems and goals. In these cases, it’s normally better to create separate explainer videos that are tailored to each target vs. trying to cover off everything in a single production.

Clients will often call us and begin the conversation by talking about how they’d like to execute their video. They send links to animations they like, an art style that they insist on using, a cool video with funky music they want to emulate etc. Don’t get me wrong, execution is indeed very important (see Deadly Sin #5)- but first and foremost, a great video begins with a compelling script.

It’s the message that makes or breaks these videos, not just stunning graphics, 3D characters, spinning logos or other elaborate forms of eye candy. Explainer videos are not unlike the entertainment industry in this regard: have you ever been to a big-budget Hollywood movie that, despite its special effects wizardly and gazillion-dollar budget, had a plot that made it unbearable to watch? Exactly.

One could have a well-crafted story, executed modestly with fairly simplistic animation and it could still be highly impactful and effective.  Conversely, you could have a confusing, convoluted script brought to life by Pixar’s finest animators and people would still click off of it in a heartbeat. The show South Park is a good example. Despite it’s basic animation style, it has been wildly successful and is the third-longest running animated program in US television history.

In 2013, TV Guide ranked South Park the tenth Greatest TV Cartoon of All Time. South Park’s secret lies in the writing, not the animation.

But wait, didn’t we just get done saying that the story trumps all when it comes to these videos!? Yes, of course, but let’s get serious. Looks do matter and you should have a least some level of care and professionalism when it comes to the execution.

Granted, explainer videos are commonly created for start-ups who understandably can’t afford or want to pay big agency budgets but still…are you really going to entrust one of your brand’s most important assets to some dude with an After Effects template who is willing create an animated video for a few bucks…or even a few hundred bucks? The same goes for a voice over. True voice over professionals are at the top of their game for a reason. Someone charging a few bones on one of those freelance marketplaces likely lacks both the delivery and microphone quality you need to create a top-notch explainer video.

We spend countless hours producing these things at Gisteo…from client discussions to script development, to multiple rounds of revisions and fine-tuning to the final animation and delivery. I think the attention to detail shows in our work and the opposite is true for much of what you see that’s done “on the cheap.” In my opinion, it’s better to have no video at all than to compromise your brand image with extremely low-quality, cookie-cutter execution.

Success Tip #6: Don’t put the “cart before the horse”

As the old and…yes…overused proverb goes, you should never “put the cart before the horse.  This is so very true when deciding to make an explainer video. From my experience, start-ups are some of the biggest “cart before the horse” offenders out there right now.

If you are still defining your value proposition, an explainer video likely will not help you. Stop, breathe and really map out on paper who you are, what you stand for and what makes you better than existing solutions out there. In addition, if you haven’t spent time creating an identity, complete with a quality name, logo and tagline, do that first. Those elements are essential building blocks for any brand.

Too many companies have jumped on the explainer video bandwagon over the past few years. To make matters worse, they’re often tight on budget and turn to the aforementioned cheap solutions, making them look bad and contributing to a general explainer video saturation. Bottom line: if you’re not capable of crystallizing what you’re all about in a short sentence/paragraph while expressing the strength of your brand in way that’s easy to grasp, an explainer video is unlikely to help your cause.

Success Tip #8: Leverage the hell out of your finished video

Assuming you already have a strong foundation and a clear idea of what you’re all about, explainer videos can be powerful marketing tools. Many people are more visual and/or auditory learners and, for them, being able to push “play” to watch a 60-90 second summary of XYZ’s offering is pure viewing bliss. It could mean the difference between them clicking off the page in 5 seconds or hanging out for a few minutes and responding to your call-to-action.

So it’s alarming to see that many companies who’ve gone through the process of creating a solid explainer video fail to fully leverage its potential. They’ll bury the video somewhere in the About Us portion of their website or some other less-visible page in their website’s equivalent of a basement, rather than placing it smack-dab on the homepage. Countless studies show that explainer videos can improve conversions, so you want to make sure the video is easily found and viewed by your audience.

Furthermore, companies can also get a great ROI from their video outside of simply putting it on their homepage. You can and should use it in social media (Youtube by itself is the number #2 search engine in the world), email blasts, advertising campaigns, events, conferences, presentations etc.- potentially giving you an even greater overall “bang for your buck.”

So there you have it. If you take these 7 secrets to heart, you’ll be well on your way to crafting an explainer video that seduces, enlightens, converts and, most importantly, doesn’t suck!